MONGOLIA’S HUMANITARIAN ASSISTANCE TO THE UNITED STATES WAS HANDED OVER

MONGOLIA’S HUMANITARIAN ASSISTANCE TO THE UNITED STATES WAS HANDED OVER

H.E. Mr. Yondon Otgonbayar, Ambassador Extraordinary and Plenipotentiary of Mongolia to the United States, has officially handed over the 60 thousand PPEs to Mr. Mike O’Hare, Regional Administrator of the FEMA’s Region 10, on June 21, 2020. The PPEs are the donation of the people and Government of Mongolia to the people and Government of the United States, which is delivered as part of the “Far Is No Distance For Friends” humanitarian act. The representatives from FEMA, Port of Seattle as well as Embassy of Mongolia in Washington DC and Mongolian Consulate-General in San Francisco were present at the hand-over event.

The PPEs will be distributed by the FEMA to the states of Arizona and Nevada.

In the Declaration on Strategic Partnership between Mongolia and the U.S., declared by the President of Mongolia H.E. Mr. Kh. Battulga and the US President Donald Trump in 2019; and a Roadmap for Expanded Economic Partnership between Mongolia and the U.S., announced by the Prime Minister of Mongolia, H.E. Mr. U.Khurelsukh, and the US Vice President Mike Pence in 2018, the two sides agreed to increase the opportunities for economic cooperation, expand the relations across all areas of cooperation, including political, economic, cultural, educational and humanitarian, as well as people-to-people ties; recognized the importance of transport development and aim to improve the competitiveness of their respective transportation sectors in more open markets.

The Boeing’s B-767 airplane, named after Chinggis Khaan, is making a first-ever direct flight between Mongolia and the United States while bringing the PPEs. On the way back, the airplane will carry onboard Mongolian citizens stranded in the U.S. and dinosaur fossils. Ambassador stressed that these two-way flights are turning the new page of aviation cooperation between Mongolia and the United States and setting the new milestone in the bilateral relations. 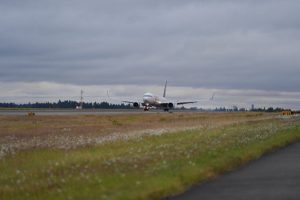 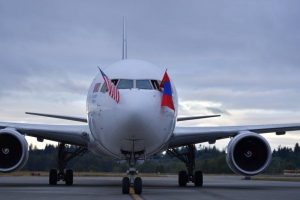 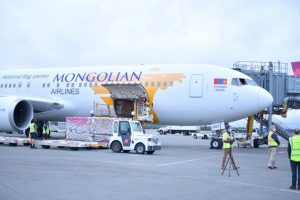